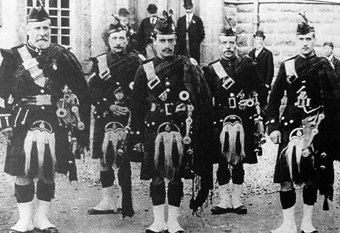 History of the Aberfeldy Pipe Band

During the 1800’s bagpipe playing was very popular in the Aberfeldy area and pipers were numerous throughout the Tay Valley. When the Volunteers first started, these players were in great demand, for battalion drills at Birnam and full dress parades at  home. There were four outstanding pipers in these days – “Erchie Bruach” (Forbes), Sheamus Scrimgeour The “Pipher Direach” and John McGreror of Killiechassie, Grandtully, Drumcharry and Castle Menzies (Piper to Sir Robert Menzies).

Then came Duncan MacDougall, piper to the Earl of Breadalbane, previously with the Prince of Wales (King Edward VII) and for a season at Osbourne, Queen Victoria herself. He gathered together all the best players in the area and formed them into a band, with him, as Pipe Major, for service in the 5th Volunteer Battalion, Black Watch. At this time 90% of the battalion pipers came from A Company Aberfeldy.

This band formed the nucleus of a more famous one formed in 1903, mainly through the enthusiasm and untiring efforts of ex Bailie David Anderson, Jeweler (one of his sons married one of Duncan MacDougall’s daughters). By determined exertions, David Anderson raised the money for all of the band’s equipment, consisting of :- one big drum, three side drums, of the best quality, and full Highland costume for the 14 men who comprised the band. This uniform was, kilts and plaids of Black Watch tartan and green tunics with gold facings.

From the start the band was very popular and highly successful. Its crowning success was winning the Championship of Great Britain at Edinburgh in 1905.

This must have been very gratifying to David Anderson, the band’s founder, and was a well deserved reward for his ungrudging and honorary services.

After the great achievement of winning the championship the band was in great demand and was offered many more arrangements than they could accept. They played at all the principal agricultural shows and Highland Gatherings in central Scotland, including three days at the Highland Agricultural Society’s show.

The band was under the leadership of Pipe Major Gavin Campbell MacDougall, son of above Duncan, (Bagpipe maker to King Edward VII and himself a famous exponent, who when in his teens, won the gold medal at the Northern Gathering at Inverness) and it consisted of ten  pipers, one bass drummer and three side drummers. 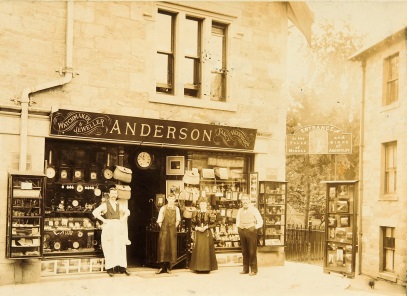 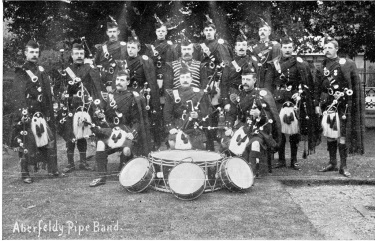 What contributed largely to the band’s successful playing, was that the music was written out by David Anderson, so that all the pipers played the time in the same style.

The band was fortunate in having Duncan Robertson as big drummer whose style was an outstanding feature and who gave the necessary flourish of the drum sticks to perfection. Then in the 5th Volunteer Battalion Black Watch, he was complimented by General Sir Archibald Hunter who took particular notice of his correct and steady timekeeping.

For a number of years the band played regularly, once or twice a week, at the Black Watch Monument and at the “Square” and attracted large crowds from far and near. All the members gave their services free for these town parades.

On Gavin C MacDougall’s death in 1910, his brother John succeeded him, as Pipe Major, and when John passed away, Neil McGregor (piper to the late Sir Robert Menzies) was appointed. The last survivor of this band was John McKerchar, son of James McKerchar cabinet maker, who became a bank manager in Canada. 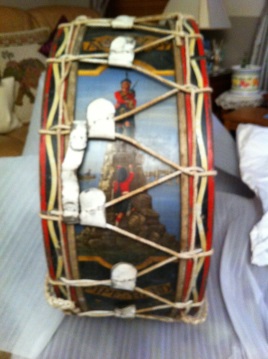 Your ticket for the: Aberfeldy Pipe Band