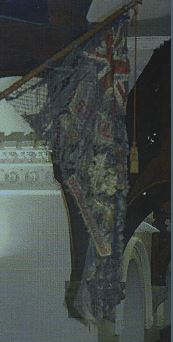 The 3rd Perthshire (Breadalbane) Rifle Volunteer Corps, four companies strong, was raised at the end of 1859, and its officers were commissioned on February 29th1860, the major-commandant being John, 2nd  Marquess of Breadalbane, K.T. Headquarters were at Taymouth Castle, and those of its four companies; 1st at Kenmore, 2nd at Aberfeldy, 3rd at Killin and 4th at Strathfillan. To this corps was attached, for administrative purposes, the 10th Perthshire Rifle Volunteer Corps, of one company, with headquarters at Strathtay, raised on May 19th 1860.

On November 12th 1861, the 2nd Administrative Battalion Perthshire Rifle Volunteers, with headquarters at Taymouth, was formed,  comprising the 3rd and 10th Perth and the 9th Argyllshire Rifle Volunteers, the latter headquartered at Glenorchy and raised in April 1860 from the Breadalbane Estates in Argyllshire. In 1865 the 9th Argyllshire was transferred to its own county battalion, and in 1869 the 3rdPerthshire was reduced to two companies and split into two corps of one company each, the 3rd (Breadalbane) at Aberfeldy and the 4th(Breadalbane) at Killin, and at the same time the 5th (Blairgowrie), 7th (Coupar Angus), 9th (Alyth) 123th (St Martins) and 14th (Birnam) Corps were transferred to the 2nd from the 1st Administrative Battalion Perthshire Rifle Volunteers, and the strength of the battalion was raised to nine companies by the formation of the 20th Corps at Pitlochry in 1869. Battalion headquarters were at the same time moved to Birnam.

By General Order 181 of December 1st 1887, the title 5th (Perthshire Highland) Volunteer Battalion, the Black Watch, was conferred on the battalion.

During the South African War (1900 – 1902), 94 members of the battalion served in the field, of whom 23 non commissioned officers and men joined the 1stbattalion , Lt F.B. Buchanan-White and 31 men the 2nd battalion, and Lt. T Ferguson and 10 men the 3rd Volunteer Service Company of the Black Watch, the remainder serving in various other corps. Two men were wounded and three died of disease. 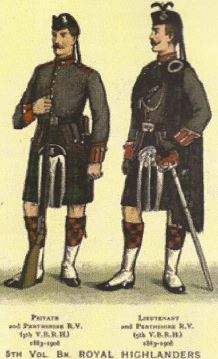 With the Haldane Reforms of 1908 the 5th became the 8th (Highland) Cyclists Battalion, losing their kilts. This enabled Captain John Wylie to form H Company the 6th Black Watch in Aberfeldy.

In 1912, the last Colonel of the battalion, Gavin, 3rd Marquess of Breadalbane, K.G., A.D.C., (who commanded the battalion from 17th February 1897) had the colours placed in Kenmore Kirk.

There are commemorative plaques on the staffs of both the Queen’s Colours (the Union Flag) and the Battalion colours (the blue flag with the Union Jack at the top). The top plaque on each reads:

Presented to the parish church of Kenmore by Colonel the Marquis of Breadalbane K.G. A.D.C. The last Colonel of the Battalion. February 1912.

In addition on the Queen’s colours is the inscription :-

And on the Battalion colours is the inscription :-

Members of those the Battalion got wounded

Your ticket for the: 5th (Perthshire) Volunteer Battalion (The Black Watch) Royal Highlanders.