The men of the 6th were now plunged into the vortex of the great offensive, and a period of strenuous work followed, culminating in their first big engagement at High Wood on Sunday, 30th July. The events that led up to the attack may be related in the words of one who took part in it 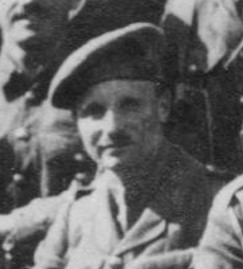 Lieut. A. N. Cordner:- “We left Dernancourt on the night of July 21st and marched a road we knew very well rumour the previous sojourn near Albert, but at certain crossroads, we turned off to the right, and the suburb of Albert we passed through was not very familiar to us. We carried on, and passed close to Fricourt and Mametz, seeing as we proceeded more certain signs of the big advance our troops had made and trying to fancy the various German lines as we passed over them. Then we gradually got into our gun area, and it was simply amazing to see the way our bigger guns were massed together. We all remember one huge, big brute which lay on the right of the road we were on, and just as we passed it the gunners let it go, and the hot air and the flash made many a man jump.
We soon came into a gas infected area and got the order to put on our P.H. helmets and goggles, with which it was difficult in front of you. We floundered about in the dark, and at one point I saw a Black Watch sergeant lying by the side of the road, but he was quite dead. I afterwords heard that some of the 7th Battalion had been killed by a gas shell earlier in the night.

It was approaching morning when we arrived at our “billets” in Mametz Wood, and I don’t think I ever saw a battalion clear out quicker than the English one we relieved, and I don’t blame them either. A number of us, including most of No.1 Coy (Aberfeldy and Pitlochry,) made use of a new gun position in the course of erection, where we lay down and slept till breakfast was ready the next morning, or until we had a bite. Then we got orders to move a little to the rear of the wood, and there we stayed for four days, during which we had a wonderfully quiet time, though at moments we were slightly disturbed by Boche shells.
One of the great sights during these days was the way the artillery limbers in some miraculous manner succeeded in dodging “crumps”. When one expected to see a mangled mass of humanity, horses and limber, one just saw the team and limber galloping away through the smoke 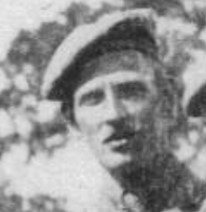 We had some reconnoitring to do in order to find out our position at High Wood and the line which the 154th Brigade were occupying and there were numerous working and carrying parties to keep all ranks busy. Many were the “souvenirs” the enemy had left behind, buried and otherwise, and a stroll through Mamaetz Wood gave some idea of the fierce fighting that took place within its confines and the appalling difficulties which our troops had to encounter in the way of barbed wire entanglements from tree to tree.
After the four days had expired Nos. 1 and 2 Companies went up to advanced positions, No. 2 holding a line of trenches from the left of High Wood to a windmill in the direction of Bazentin le Petit. No. 1 Company split into two parts. Two platoons under “Sandie” Muir and Hal Miller, occupied a line of trenches in front of Bazentin le Grand, and two platoons under Major Milligan and myself, occupied a similar set of trenches behind B Company, both being a sort of local reserve.
He used to have an awful nerve-racking experience, as there was a battery of field guns on the ridge at the other side of the road, and the Boche seemed to have a special spite against them. One morning, for a full hour and a half, without any cessation whatever, “crumps” fell around us. Many were buried from the ground giving way to the vibration, and the whole place was littered with shrapnel and earth. One was helpless to aid others, though in some way or other we only had a few minor casualties, and when everyone expected to find he was the sole survivor he found nobody missing.
After a few days of this, we got orders to move into line for our final real “push”. Everything was in confusion, as orders were only given out at 11 a.m., and with the thousand and one things to be done, it was little wonder that the show was a failure. We had to draw emergency rations, water and ammunition, our spare kit had to be stacked near battalion headquarters, and we had to get forward into our new position, to attack at 5 50 p.m. One advantage, at any rate, was the anxious period of waiting before going “over the top”, was reduced to a minimum.
One of the funny incidents of the war took place when the post of several days accumulation arrived, and also some bottles of wine, which were worth their weight in gold.

We went up to High Wood as lightly as possible, and luckily for us the weather kept very dry. We trekked up across open country about 1 p.m., and the first thing that struck me was to find an 18 pounder hidden away in a gun pit just behind the wood with its sights aligned point blank on the Boche trenches around Martinpuich. 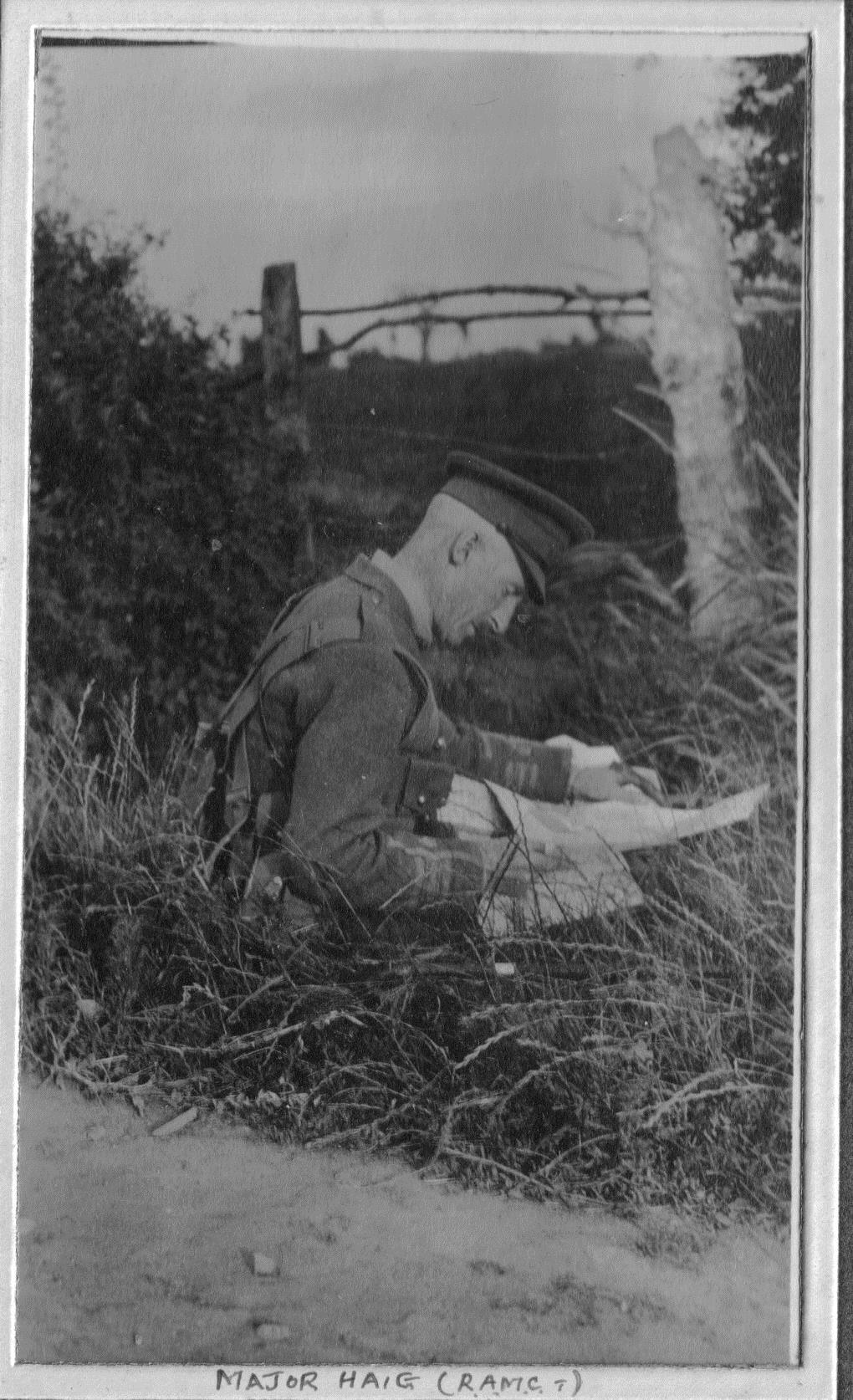 We lined a series of trenches along the road from the southern end of the wood towards Longueval and Delville Wood. Nos 3 and 4 Companies went over in extended order from the right, and we were ready to move forward in support of No. 4 on the left. No.1 Platoon, under Hal Miller, was used as connecting lines and was almost wiped out by machine gun fire from a strong point in the wood which the 7th Battalion was unable to capture. We actually had got out of the trench and gone forward about ten yards when we were ordered to come back, and soon afterwards in the dusk the remains of No. 3 and 4 Companies straggled back through our lines”. 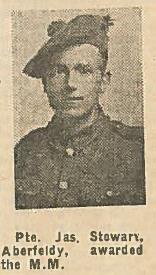 On “going over”, the attacking companies followed the barrage, walking quite slowly, for a distance of about fifty yards. Then they got orders toile down, and on rising to move again they were met with a hail of machine gun fire, and the men began to fall. Private Alf Cooper, Perth, was one of the first to go down, and Corpl. Melville, Scone, fell immediately afterwards. Lieut. Hally was wounded in the arm and Sergt. Major Gardiner, Dunblane, was in the act of bandaging the officer’s wound when he was shot through the head. Bugler Thomas Forbes saw the sergeant major fall and went to his assistance, and he also was hit on the head and killed. Major Innes was also wounded on the head in the attack, but refused to go back to the dressing station, and, having had the injury temporarily bandaged, remained to urge on and accompany his men. Captain Jack Hally, Auchterarder, was killed almost up against the enemy wire, gallantly leading the remnants of his company.
The men continued to advance, getting right up to the German barbed wire in the face of terrific fire from enemy machine guns. At one point a burly German was seen standing on the trench parapet beckoning the attackers forward, while beside him a machine gunner poured out a stream of lead on the advancing line.
Meantime the 7th Black Watch, attacking the left, had been held up at a powerful redoubt in the High Wood, and the 6th in their forward positions were now isolated and exposed to the full force of the German defensive fire. To go on was impossible, so the men took shelter in the shell holes and depressions in the ground, making their way back to the lines when darkness fell. But many wounded and dying men had to be left behind under circumstances which made rescue impossible. Every effort was exerted to bring them in, and may heroic excursions were made into No Man’s Land, over which the enemy kept up a constant and vicious fire. For his gallant work in carrying back wounded Pte. George Durward was afterwards awarded the Military Medal; and Pte. James Stewart, Aberfeldy, won the same honour for his bravery in the field.
The result of the attack was deeply disappointing. The men went forward magnificently, as steady as on practice, but the want of adequate artillery preparation and the “hold-up” on the left negative any chance of success the effort ever had. 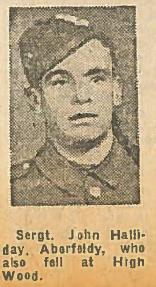 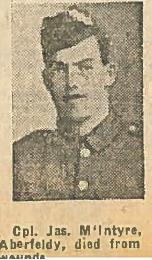 When daylight came again it was heartrending to peer over the parapet and see, here and there in the expanse of shell pitted ground, a hand held up, to show that a man lay there wounded but alive. One lay within 20 yards of the parapet. He had bandaged his wound himself, but in his weakness, he had done it badly, and when it was at last possible to reach him he had bled to death.

All that night a counter-attack was expected, but it never came. A communication trench was dug forward about 100 yards under desultory fire from machine guns. It was in this operation that Don McEwan was hit.
The Sixth remained in the front all day in the very hot sun, and towards night, when men expected to be relieved, they found that instead, they had to dig a new trench about 100 yards in front of their lines. The Engineers came up, but owing to a sudden Boche bombardment they had to postpone their measurements. Eventually, however, the men got on with the task.
Every man worked as hard as he could and made a very decent traversed trench, and the in utter exhaustion lay down and slept, while the officers in charge lay in the corn and chatted. All this was within a couple of hundred yards of the German front line, but never a shot was fired. That night more survivors were brought in, several of the missing beings thus accounted for, and a number of bodies were also brought in. But, unfortunately, few could be spared for this work as every available man was out digging. The dead were buried in the wood, where lies many a hallowed spot. The two leading companies were almost annihilated and in the process of bringing in the wounded many non commissioned officers and men lost their lives. Great credit was due to Major Haig, R.A.M.C and to the Battalion stretcher bearers for their organization and conduct carrying out the evacuation of the wounded.
The Six Battalion losses in this action and in the days proceeding it amounted to four officers killed (Capt. Hally, Lieutenants Miller, McEwan and Roy), six wounded: 50 other ranks killed and 200 wounded. Nine Military Medals were awarded to NCO’s and men of the Battalion.

Your ticket for the: High Wood