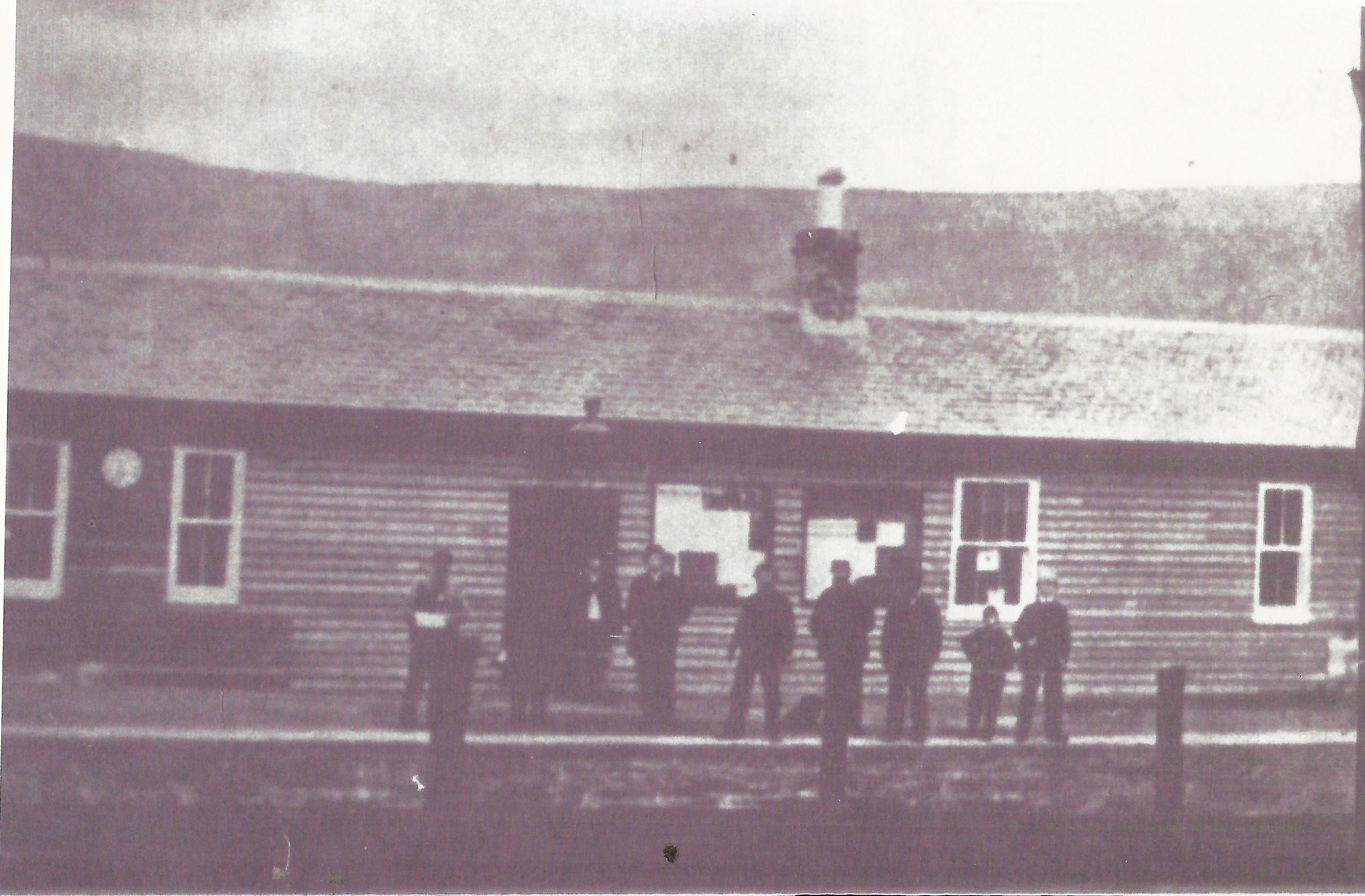 The Aberfeldy Branch Line was opened for traffic on the third day of July, 1865 - just forty six years ago this week.

The construction of the branch cost more than any of the other branch lines of the Highland Railway Company, amounting to over £12,000 a mile. Over 800,000 cubic yards of cutting were necessary, while along the nine miles to which it extends there are no fewer than forty one bridges over burns, rivers and roads, several of them very ornate structures. The "Inverness Advertiser" of 4th  March, 1862, has the following interesting paragraphs :-

"A meeting was held in the Breadalbane Arms Hotel, Aberfeldy, on Tuesday last, at which meeting a deputation of the Directors of the main line were present, consisting of Hon. T. C. Bruce (Chairman of the Coy.); Sir Alexander Gordon Cumming, Bart.; Henry Inglis,  Esq. W.S.;  Joseph Mitchell, Esq, C.E,: and Andrew Dougall, Esq., Secretary. Sir Robert Menzies was in the Chair. It was stated that the total amount of stock taken up in the district amounted amounted to £30,370, for the formation of the branch line, including £11,000 subscribed by Lord Breadalbane. Although £35,000 was the sum originally fixed by the Directors before they would undertake to make the branch, they agreed to proceed with its construction."

It was almost entirely through the persistent and determined efforts of the late Sir Robert Menzies, Bart. that the Directors ultimately agreed to proceed with the branch line. At first the Directors declined to have anything to do with it, and Sir Robert, in a letter dated 2nd Jan., 1899, states - "When the Directors declined to proceed with the Aberfeldy Branch, I ceased to be one, and opposed the amalgamation of the Highland with the Perth and Dunkeld Railway, on the grounds that no line can be amalgamated with another till its whole length has been completed. In that I succeeded, and the Perth and Dunkeld Railway was adopted by the Highland with the condition that the Directors were to pay a fine of £25 a day to the Queen if the Aberfeldy Branch was not completed within the time named. That was done, and it has been a good paying bit of the Highland Railway, even after two bridges over the Tummel and Tay were imposed on it."

Shortly after the meeting of the Directors mentioned above, the first sod of the branch line was cut by the Hon. Mrs Stewart Menzies of Chesthill, Glenlyon, just about 100 yards eastward from the end of the present station platform. The line took about three years to construct and we take another interesting paragraph from the Dundee Advertiser of 3rd July 1865 which states - "The Aberfeldy Branch was inspected on Saturday by the Government Inspector, Captain Birch, CE. He was accompanied by Eneas Macintosh of Raigmore; Cluny Macpherson; Major Cumming Bruce, M.P.; Mr Andrew Dougall, Inverness; Mr Joseph Mitchell, C.E.; Mr Murdoch Paterson, C.E.; Mr Battle, Manager, Permanent Way; Mr D Jones, Loco. Superintendent; Messers Fyfe, Lamond and Bulmer; Mr E. O. Douglas, Killiechassie; Colonel Murray, Moness; Mr James Wylie, factor, Breadalbane Estate; Mr H.R.B. Peill, factor to Sir Robert Menzies; Mr George Rankin, banker, Aberfeldy; Colonel Dewar, Pitlochry; Colonel Irvine, Pitlochry; Mr Oswald, Dunniker; Mr P. S. Keir, Kindrogan, etc. The inspection was highly satisfactory. The railway had been constructed by Messrs Grieve & MacDonald, contractor.  Counting bridges over burns, rivers and roads, there are forty five in all on this stretch of 8 ¾ miles. The curves are very easy, and the gradients next to level. Having now been sanctioned by the Government Inspector, the line will be opened for general traffic today ( 3rd July, 1865). There will be two intermediate stations, Grantully and Lagg, the former now open and the latter shortly to be. After the inspection the above mentioned company dined in the Breadalbane Arms Hotel, Aberfeldy. The Chairman gave the loyal and patriotic toasts, which were cordially responded to. He thereafter gave "Success to the Aberfeldy Branch", which was most enthusiastically received. The idea of having a station at Lagg was ultimately dropped. The platform was constructed, but no buildings were ever erected. Probably what led originally to the intention of constructing a station at Lagg was the close proximity of Grantully distillery, which at the time was in active operation, and also the proximity of Cluny Ferry. That a small station at the Lagg would have proved of very great convenience to those resident in and around Pitcairn, Cluny Braes and Killiechassie is quite evident, the number resident in those parts at that time being considerable larger than it is today; but no doubt it was found the expense of constructing and maintaining a station within two miles of the terminal station, would not be warranted by the traffic receipts. For many years after the branch line was opened only three trains were run to and from Ballinluig Junction, one in the morning, one at midday, and one in the evening.

As Aberfeldy increased in importance, there was a consequent increase in traffic, and gradually additional trains were run, until today we have eight or nine running to and from the junction. The Aberfeldy branch line is one of the best paying branch line on the Highland Railway system. Summer and winter it yields sound revenue. The goods traffic is very heavy, even heavier than the passenger. This is easily accounted for when it is remembered that Aberfeldy is the centre of a very large agricultural district. The inwards goods traffic to Aberfeldy Station is over 14,000 tons annually, and the outward over 13,000 tons. Timber, of course, makes up the bulk of the outward traffic.

The original station buildings at Aberfeldy were constructed of wood, and were burnt to the ground about 34 years ago, the present buildings being erected in 1879. A small wooden structure, which was attached to the original station buildings, and which escaped the fire, is still standing, and is now used as a coal shed. While the station accommodation may have been more than sufficient in 1879, it is now found to be decidedly inadequate for present day requirements. The question of increasing the accommodation has been under the consideration of the Directors on more than one occasion within recent years, but, unfortunately, up to the present time nothing has been done.

It is often said that it would be a distinct advantage to Aberfeldy if the railway was extended to Kenmore and Killin, but it is very doubtful if Aberfeldy would gain by any such extension. It would certainly lose its present importance as a terminal station, and the loss in this respect might be greater than the gain in other respects.

Your ticket for the: Early Years